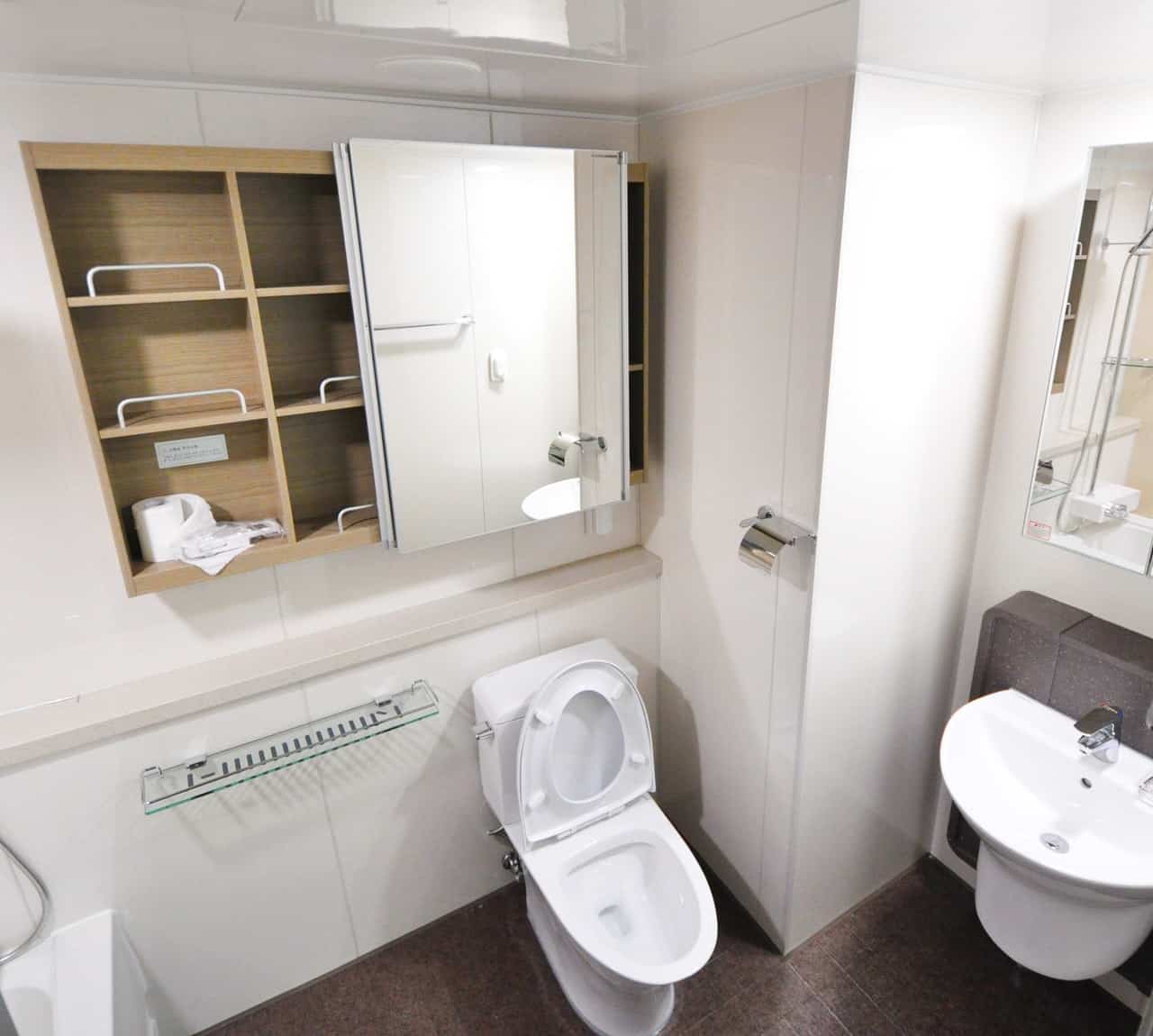 The toilet is one of the most useful inventions of all time.

Toilets are something that we use every day – hopefully, at least – though most people don’t stop to think about how their toilet works, or when it was invented.

How often do you think about the history of the toilet, and how often do you repeat the commonly known fact that Thomas Crapper invented the first modern toilet?

Unfortunately, the Crapper tale is one of the oldest myths related to the invention of the toilet. Modern toilets, at least the flushing kind that we know today, were invented years before Thomas Crapper had anything to do with the invention or sales of a flushing mechanism.

Credit for the invention of the modern flushing toilet actually goes to someone called John Harington (alternatively, Harrington) who invented the first water-closet for Queen Elizabeth I.

If you think that you know everything there is to know about the invention of the toilet, it might be time to think again. The modern toilet doesn’t have a single person credited with its invention, but several people who invented different types of toilets at various points in history.

Toilet accessories like the toilet plunger and the toilet roll were all, also, invented separately from the toilet or water closet itself.

Sure, you don’t have to know where toilets come from to use or flush or fix one.

What did people do before the invention of toilets?

People had to do whatever they could to get by before the invention of flushing toilets or water closets!

Still, it’s not as bad as you would imagine. Early hygiene needs would push people to realize a need for, at least, pits in the ground to get their business done very early on – as early as 3, 200 BCE, where evidence of clay pipes and filtration systems have been unearthed.

Waste disposal was still a problem before the invention of the toilet, and infections related to contamination were more likely before the days of proper toilet paper, toilets and sanitization like we have now.

Did we have toilets before we had flushing toilets?

Some of the earliest evidence of toilets that scientists have found so far is in Uruk. These early toilet examples are said to date back to at least 3, 200 BCE.

While they weren’t as super-modern as the contraptions we call toilets today, these were enough for basic hygiene needs of the time. Ancient toilets, at least back then, were simple pits in the ground that led into clay pipe systems for drainage.

What is the earliest example of toilet defacement?

Graffiti on toilets isn’t something anyone should condone (and it’s not something that anyone should go out to do!), though the urge to vandalize bathrooms appears to be as ancient as the idea of the toilet itself.

Some of the earliest examples of people writing on communal bathroom walls dates back to as early as the first century AD. Way before Facebook, people found other ways to write on walls!

Who invented the flushing toilet?

While many people still believe (wrongly!) that the invention of the toilet is thanks to Thomas Crapper, the flushing toilet is actually credited to John Harington in 1596. The first toilet, or water-closet with the ability to drain the bowl of water, was invented as a gift for Queen Elizabeth I.

This is much earlier than most people would expect! According to reports, the toilet was not initially well-received by the Queen herself – at least not at first.

Unfortunately, there were a few more elements of the toilet which still had to be thought about by future inventors.

Who invented the bidet?

The bidet is a type of flushing basin (or toilet seat attachment) that ejects a water jet to clean up after toilet use, rather than to have the user rely on toilet paper.

Bidets are popular in Asia and Europe, though weren’t seen in America as much until more recent years.

The origin of the bidet can be traced back to France. While we know that the bidet became a more common thing to see in homes in the 17th century, even history experts are not sure exactly who invented the bidet – or when.

Bidets are seen in homes much more often, but can also be seen in places where a lot of international travelers pass through (such as airports and hotels). Due to its appearance, many people mistake sink-type bidets for water fountains when they are not the first time they see one.

The Story (and Myth) of Crapper & Co

The idea that Thomas Crapper invented the flushing toilet (and that’s why we use the word ‘crapper’ as an informal toilet term) isn’t completely true.

Thomas Crapper did have something to do with the flushing toilet, but he was not an early toilet inventor.

Instead, Thomas Crapper ran the first toilet and sink display store in King’s Road, which he called Crapper & Co. It would become one of the first and most successful places that people could go to pick out their own toilet.

Crapper didn’t invent the toilet, but instead sold them to businessess and the public.

Who invented the ballcock mechanism?

The ballcock mechanism, or the floating ball you find in the cistern of a toilet, was invented separately from everything else. The patent for the ballcock, which regulates water level and helps the toilet to flush properly, was invented in 1790 by Jose Antonio de Alzate y Ramirez.

Later, a version of the ballcock would become standard for use in steam engines. In that case, not for flushing.

Who invented the first plunger?

Plungers and toilets were not invented at the same time.

Early toilets must have been a convenience, but a total disaster at the same time.

Hawley would later make a fortune not from toilets or plungers, but from candy sales as a confectioner.

Is it true that the plunger was only invented after the toilet?

See the section above for a fuller answer.

Plungers, and other tools of the toilet trade, were only invented long after we had access to basic toilets. It’s much like the can opener, which was invented a couple of decades after the can.

What did we do before plungers?

Who invented the first toilet paper?

Toilet paper rolls and toilets were not invented at the same point in history, either.

We can thank Joseph Gayetty in the 1850s for the first toilet paper sold to people. It would earn him exactly the small fortune you would expect – people really needed toilet paper by this point in time!

But the toilet paper of the time had one very serious drawback: splinters.

Things like two-ply was barely a question when toilet paper was just invented. Toilet paper wasn’t quite in common use yet, and options would only become available later.

What did people use before toilet paper?

Long before the use of toilet paper, humans still had a need to wipe and clean up after they were finished doing their business. Prehistoric people would use whatever was available to wipe, from shells to grass.

The toilet paper roll is yet another toilet-related invention that was invented separately from the flushing toilet.

Toilet paper rolls, to secure toilet paper in place and be entertainment for cats and dogs everywhere, was invented by Seth Wheeler in 1891.

Does toilet paper go over or under the roll?

The question of how to place toilet paper on the roll is one of the most common things about toilets and toilet paper people Google – and argue about.

According to the original Seth Wheeler patent, toilet paper should be placed over the roll – not under!

Is that thing about smartphones and toilet seats true?

This is one of the most common toilet-related facts you will see on the internet: smartphones and touch screens are dirtier than toilet seats.

Here’s one of the things about toilets that is commonly repeated, but also one of the facts that turn out to be completely true. According to studies, smartphones can be statistically more filled with bacteria than the average seat.

When were electronic toilets invented?

The electronic bidet was first invented in the 1980s, and made popular in Japan where it can still be commonly seen in toilets across the country.

You don’t need an intelligent toilet to experience the combination of technology and toilets. If you have a smartphone, there are some excellent apps you can download to become more in tune with bathrooms around the world. Here are the top 3 performing apps in the toilet category that you can download right now.

Where Is Public Toilet?

Where Is Public Toilet? Is one of the best toilet-related apps for the App Store and Google Play. It does exactly what its title says, and points you in the direction of the closest toilet near you (from where you are now).

Flush Toilet Finder is an international database app full of toilets. Think of this like the Google Maps of international toilets, where you can find anywhere to go (no matter where in the world you are).

Need to find a toilet right about five minutes ago? Bathroom Scout is the number 3 app in the toilet-related category for the Play and App Stores. More than 1.3 million toilets are contained in this app – and you’ll always be able to find the closest one near you.

Conclusion: History of the Toilet and the Future

If there’s anything that we can all be grateful for, it’s the invention of the modern flushing toilet! Without it, we could all still have been stuck at earlier plumbing systems from the stone ages.

If you have access to running water and plumbing, and a flushing toilet, consider yourself very lucky to live in this age!